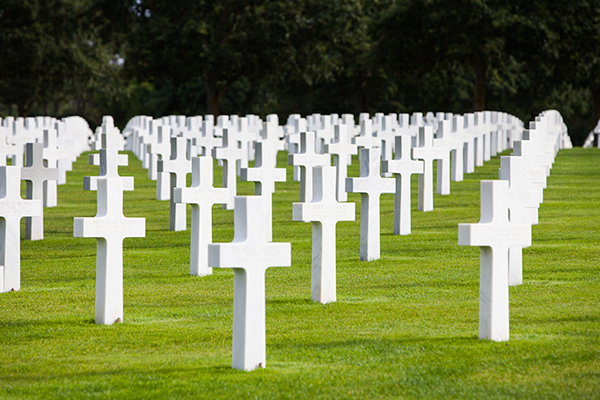 Seventy-Five years ago, the bravest and greatest generation stormed the beaches of Normandy! The first wave faced a hell that you and I cannot imagine. They kept moving forward as machine gun fire rained down on them from the pillboxes and cliffs above. But, they kept coming, wave after wave, until the Nazi positions were completely overwhelmed and defeated. Defeated by men who volunteered to be there. How do people come to a resolve to win at any cost, even at the sacrifice of their own lives? What is at the beginning before victory is even in sight?

In the words of the Apostle Paul, “Who shall separate us from the love of Christ? Shall trouble or hardship or persecution or famine or nakedness or danger or sword? No, in all these things we are more than conquerors through him who loved us.” Paul says that he is convinced that nothing could ever separate us from the love of Christ who is our victory. We are conquerors through the One from whom we cannot be separated from. When we surrender to the Jesus who has overcome death, hell, and the grave, we are assured of that same victory. When we face a battle, no matter what it is, like brave soldiers who have resolved to follow orders, it’s our surrender to our Lord that guarantees our triumph. Jesus said, “In this world, you will have trouble, but take heart, I have overcome the world”. Be encouraged, victory is yours!